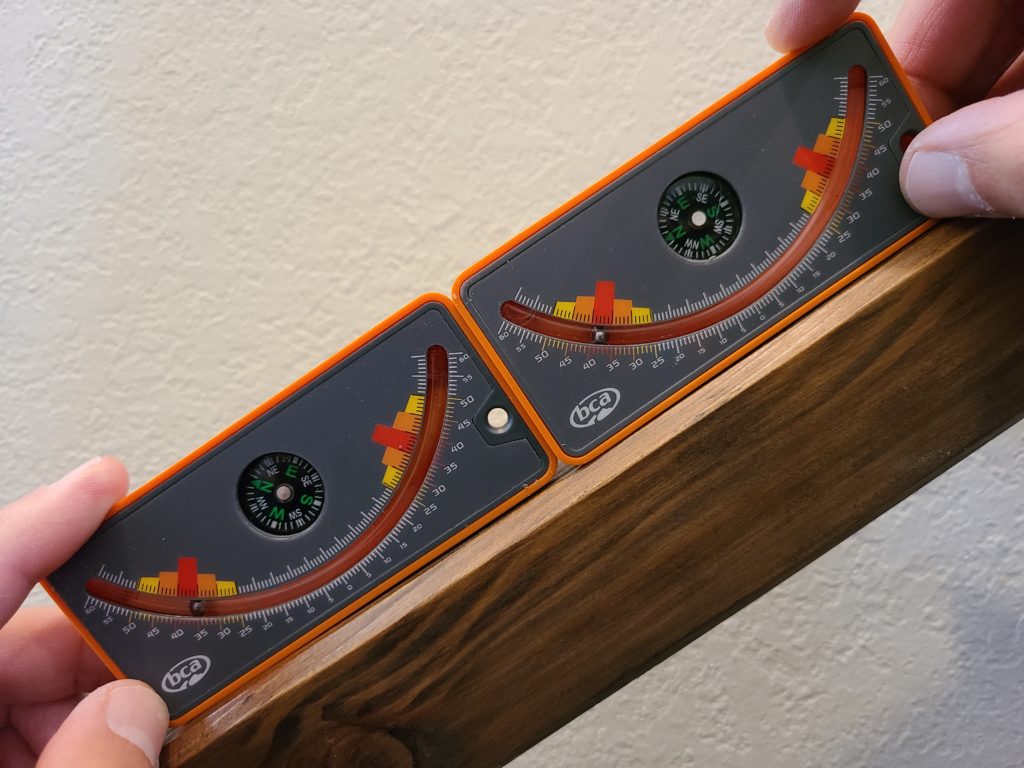 I was shocked to discover recently that the two BCA Inclinometer devices that I own were up to 2.5 degrees off in measurements from each other on the exact same slope. The following explains why I believe this is such a big deal.

A critical piece of information used by backcountry travelers to assess avalanche danger is slope angle. Since the vast majority of avalanches occur on slopes between 35-45 degrees in steepness, and very few avalanches occur on slopes less than 30 degrees[1], the ability to accurately measure slope angle in times of elevated avalanche hazard can be a life or death calculation. As a result, the accuracy of the device conducting the slope angle measurement is critical.

My personal approach to avalanche hazard mitigation is to rely heavily on slope angle, since unlike snow layers, the data is easily accessible, static*, and visible above the snow. For example, when traveling solo in the backcountry, my primary strategy is to avoid being on or under terrain that is 30 degrees or steeper.

In practice, there are two common techniques that backcountry travelers use for measuring slope angle – the first is a topographical map. Some programs, such as Caltopo’s venerable slope angle shading layer, is especially user-friendly for this purpose.** The second method is an inclinometer, which can be digital (electromechanical) or mechanical. Both Apple and Android phones have user-friendly digital inclinometer apps, which can be used to sight above, below, or across a slope. There is also a slope angle sticker available that can be attached to a ski pole, however this method seems a bit imprecise.

Regarding mechanical inclinometer devices, the most popular is the BCA Inclinometer, and is the product that spurred the crafting of this article. This is a $25 gadget that uses a free-moving small metal ball enclosed inside a curved tube filled with water. For slopes above or below you, you sight the flat top of the device with the slope and then read the angle number that the ball lines up with (making sure to take into account the height above the ground that your hands are). Some users like to lay the device down in the snow to measure, but this technique only catches the angle of the micro portion of the slope that the inclinometer is actually sitting on. In contrast, sighting a distance up or down slope tends to be a more accurate reflection of the terrain.

My own approach to planning a route based on slope angle relies upon a combination of desktop scouting, where I study the Caltopo slope angle shading layer, coupled with manually taking slope angle measurements in the field (since the underlying dataset used by Caltopo is known to not be 100% accurate, and in fact, is occasionally quite far off for some specific locations). Occasionally, I’ll even be like Rick Kane and Chandler inspecting the reef during flat surf in North Shore, and hike a route in the summer, taking slope measurements along the way with my inclinometer.

A while after buying my first BCA Inclinometer, I thought I lost it so I bought a second. When I found the first, I then had two, which I kept in different kits and used interchangeably. Both devices looked identical so I didn’t keep track of which one was which. However, I did occasionally notice that a reading on my BCA inclinometer didn’t match the Caltopo slope angle shading or my phone’s inclinometer, but I would assume the error was in the Caltopo layer or my phone’s accelerometer was off. It wasn’t until recently when I decided I wanted to do a sanity check on my two BCA devices and my phone that I realized the problem actually lay with one of the BCA Inclinometers. In measuring the slope of the railing on my stairs at home, I realized that my two BCA inclinometers measured the exact same slope with up to a 2.5 degree difference between the two of them.

Of course, depending on the snow conditions, reliance on a safety device with this large of an error can be potentially devastating. The difference between a slope of 29 degrees and 31 degrees, or 32 degrees and 34 degrees, in certain conditions can be significant.

I reached out to BCA to get their feedback on my observations and they indicated that this is not an issue that they commonly see and that their factory should have caught this problem during the quality control process. They also indicated that they are in the process of sourcing a new supplier which should provide tighter tolerances and better quality control. My sense is that BCA is not hearing a lot of complaints about faulty inclinometers, so it is possible that my defect was a freak occurrence, or maybe users just aren’t noticing. After all, it did take me multiple years to finally figure out there was a problem with my device.

One of the draws of using slope angle data to me is, that unlike snow stability, slope angle is a non-dynamic and transparent piece of data. I’ve always assumed that “it is what it is” and I can make risk management decisions based upon that foundation. Now, I’m realizing that even this foundation on which I pinned a lot of route planning, can be less rock-solid and reliable than I had previously assumed.

Of course, a slope angle is still a fixed number and theoretically can be relied upon, but the tricky part now is knowing whether the device being used to determine that angle is reliable. Like with most risky backcountry adventuring, the solution is likely a combination of redundancy (take field measurements with a digital and mechanical inclinometer) and extra margins for error. I’m also hoping that once the USGS completes its 3DEP lidar mapping program, tools such as Caltopo’s slope angle shading will become hyper-accurate, which theoretically could reduce the need for manual field measurements to a bare minimum. But until that time, I will hold on to the free reminder provided to me by a $25 piece of plastic that even when you know, you never know.

*Effective slope angle *can* change when snow drifts cause the surface angle of the snow to slope steeper or shallower than the underlying terrain. In these cases, the more important measurement is the steepness of the snow. This is one reason why relying solely on topographical data can be a mistake. Taking a manual slope angle measurement in the field can avoid this potential pitfall.

**It is recognized that Caltopo’s slope angle shading can occasionally be incorrect, sometimes by a large margin. This is due to the fact that the underlying raw dataset (usually from government sources) is not always accurate and Caltopo must rely on that data when calculating slope angle shading.